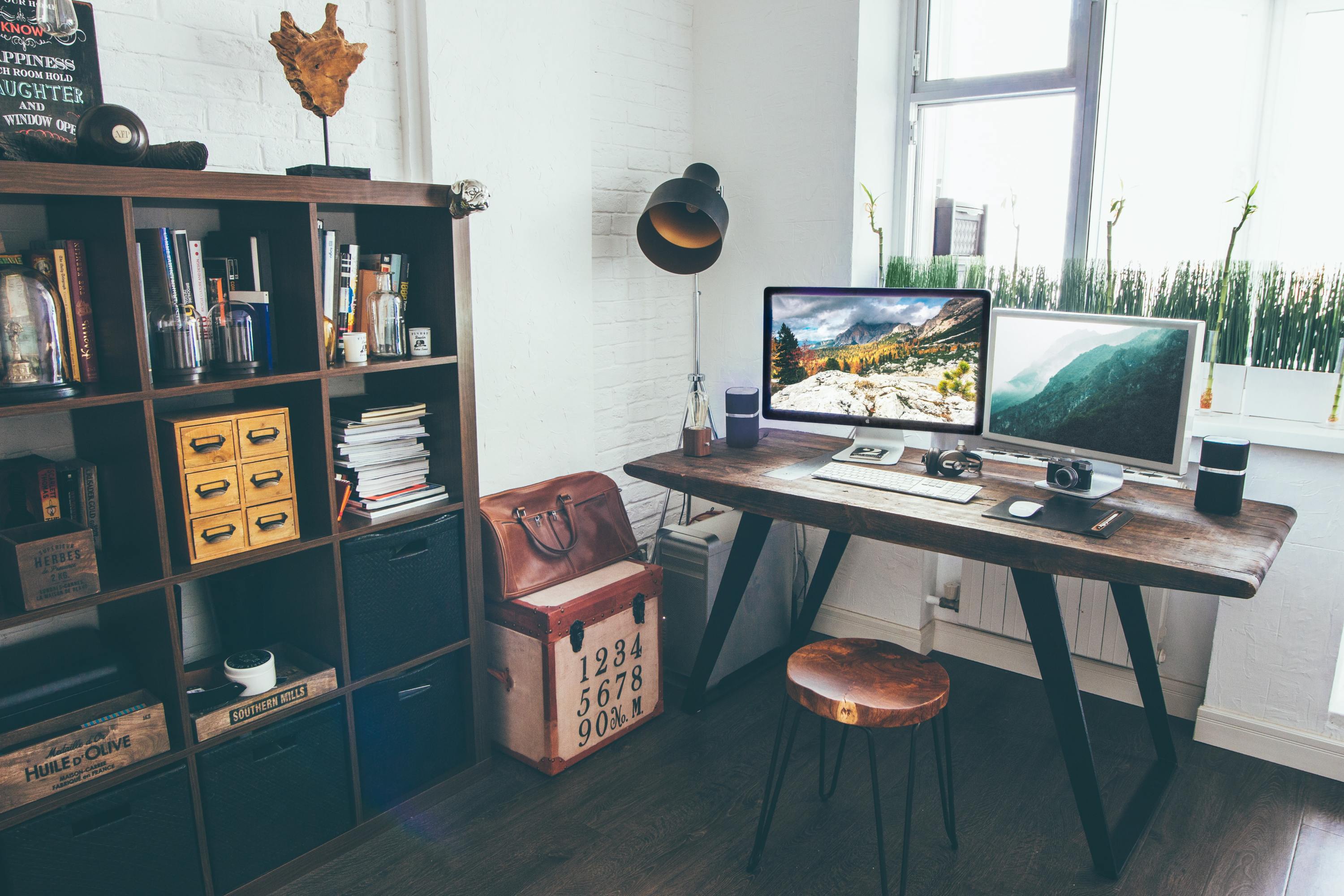 A number of modern trends, along with the upset of the Covid virus, have put pressure on firms to accept more flexibility in the way their employees work. Arguably, flexibility and working from home can enhance wellbeing. Where employees once worked a 40-hour week in a factory during daylight hours, many now work fewer hours, when they can, around other commitments, and often from home.

These changes are often accompanied by the parallel shift from employment to self-employment.

Working from home and working flexibly is nothing new. In the eighteenth century and before, almost everyone worked from home and worked around their families and spouses. Traditional single room ‘longhouses’ accommodated the family, multiple trades and beasts such as cows, sheep and chickens.

Work then was in one of three types – on the land, for a master; self-employment at home; or peripatetic, going out to clients. Houses of farm workers were in steadings around the farmyard. The children of home-working weavers slept by their dad’s loom. Spinners’ families had to accommodate the power shafts that skewered every house, delivering the drive from water wheels or steam engines at the end of the row. And fishermen’s cottages congregated at the head of the quay, as if waiting expectantly for the return of the boats.

Then the industrial revolutions of the nineteenth century attracted huge swathes of workers from poor conditions on the land, and other situations, to work as employees in factories. Towns and cities grew and with that, houses reverted to be places only to dwell.

Perhaps the greatest and final shift from houses in which work could be done to houses only for dwelling came after the World War II. The UK Government sponsored the building of New Towns and other regeneration. The dwellings built were purely for coming home to after a day’s work and for bringing up families.

The shift was, of course, not total. A minority of workers remain today in dual-purpose houses. Tradesmen and women such as undertakers, publicans, and shopkeepers ‘live above the shop’. Otherwise, the vast majority of Britons live in a house specifically designed for the family that is spatially separated from work. With the exception of a few custom builds, no house is today designed for dual use.

This spatial separation demands that workers commute between work and home. Manufacturing and services are concentrated in towns and cities and workers live in the suburbs, progressively further and further away from their employers. Pre-Covid, workers would spend an hour commuting to work in the morning, and an hour back in the evening. And others who relocate to the country in search of lower cost housing and a quieter life away from the busy cities commuted for anything up to three hours in the morning and repeat that again at night.

The Covid pandemic focused minds. The Government demanded that employees worked from home where possible. And employees themselves have had time to reflect on their previous lives, the current state and what they wanted for the future. Many recognised the absurdity of commuting for hours.

Of course, not everyone can work from home. Lockdowns revealed previously hidden categories of essential workers. Many of those were self-employed, and earned too little and got no social security support. As a result, they continued at work when they shouldn’t and were exposed to the virus more than most. Times were tough for many, and unemployment grew.

The result was a rethink of what work was. No one moved from the fundamental that work gives meaning to life. It was just that huge numbers of people redefined what work was for them. Many enjoyed the new flexibility of working round the kids. Many revelled in having up to four hours a day more leisure time. Others on the front line fighting the pandemic realised how work grew to engulf them, to trash their wellbeing, and they collapsed or rebelled.

There have been movements for many years demanding flexible working, reduced hours, a four-day working week and other departures from the mainstream grind of work. As a result of Covid, there is now a possibility that those movements will grow and new ‘normals’ will emerge.

The Covid pandemic exposed how variable an experience working from home was.

On the one hand, some employees found working from home just ghastly. They worked in a rented bedsit, and spent their time with a laptop on their knee. Some slept, ate and worked from their bed. Others perhaps found it quite tolerable. They bought drop-down desks that folded to return the bedroom to its domestic purpose after clocking-off time. Some employers recognised their responsibilities and delivered extra screens and tools to the home to replicate those in the workplace. Other employees just set up office in their library or study and embraced the new relaxed regime.

Much also depended on where the employee lived. Those near the countryside or urban parks exploited the new daytime outdoor access.

Overall though, the reports of loneliness spiralled. Traditional workplaces gave camaraderie. In 2020, singletons working in a bedsit, and even those in the heart of a family, had a pretty lonely time. Meetings focussed only on purpose and casual chit chat and gossip was lost.

Traditional workhomes enjoyed community. Spinners lived and worked in rows of houses with other spinners. They socialised together. Fishers fished together in fleets and their families joined together to gut and pack the fish at the quay head once the boats came in. Until the 1960s, work and home were frequently entwined. Subsequent years of government town planning policy has meant that, today, home working can suit some, but certainly does not suit all.

Managers should demand that employees set aside specific areas in their homes for the employer’s business activities. This has particular relevance where the employer holds certifications like ISO9001 and ISO27001 which demand separation of activities and materiel. Since the employee is paying rent or a mortgage and has other expenses associated directly with this use, it’s fair that the employer pays something for the privilege.

Changes to employment contracts to encompass working from home are complex, spanning the space and furniture, payments for use, how the work will be monitored, how wellbeing and health and safety will be assured, and what will happen if the arrangement needs to change.

In asking the employee to work from home, the manager must also understand that this may create problems for the employee. Working from home will likely be in breach of the employee’s mortgage or tenancy agreement, and the permission of mortgagor or landlord will be needed. Since the employer shifts its location to the home, it must also advise its insurers, since the employee now bears the employer’s risk in their house.

Areas of towns are set aside for specific use. These use classes are currently described in the Town and Country Planning (Use Classes) Order 1987. It's unusual for a zone to have dual use. If indeed a person is working from home - and, hence their property is in dual use - they would be due to pay both Business Rates and Council Tax.

Practically, it's likely that a home office would only attract business rates if it did not return to domestic use at the end of the day. A spare room doubling as bedroom and office would likely not be separately rateable. A converted garage with suspended ceilings, separate door and custom desking would likely be rateable because its purpose is fixed and obvious. There's more on this on the Valuation Office Agency site on GOV.UK.

For various reasons, most people working from home in the UK do so illegally - and simply keep quiet, keeping 'under the radar', hoping no-one will notice.

There is a plethora of future trends that will influence demands for flexibility in both hours, form and location of work.

As more people become aware of damage to the environment, so they will form attitudes toward employment and their employers. There is already a trend towards self-employment, even though that might reduce family incomes. But as we note, there are big problems in making changes. Houses are just not built for home working and adaptation in space, services, heating and the like will be needed if this trend is to be sustained.

Continuing the environmental theme, if reductions in carbon dioxide are to be achieved by governments, workers must travel less. Whilst the argument for a complete ban on commuting is strong, such an all-or-nothing approach negates worker need for affiliation and manager need for interaction. A compromise perhaps suggests a mixed work regime, working at home part of the week, but travelling to a shared workspace for the remainder.

Working from home, and working flexibly, requires the worker to be in communications and able to pass data just as if they were in the office or other workplace. But the UK is relatively poorly connected. Broadband connectivity (at 30Mb/s or greater) covers 96% of population. The UK Government’s aim is to deliver an in-the-office equivalent gigabit-capability to 85% by 2025. Mobile networks could take up the slack to achieve 99% population coverage but their evolution is pitifully slow. Connectivity is improving, but it has a way to go.

Presently, with workers travelling to a place of work, their homes are typically utilised for only 60% of the time. Likewise, firms occupy their premises for only 35%. If workplace and home become one, and the parties share the costs, building utilisation skyrockets. Firms can dispense with big corporate offices. The result is a single space continually occupied and heated. Cost reduction is a big motivator in firms supporting this pressure.

For now, it’s only one segment of the working population who benefit from the flexibility and working from home revolution. Perhaps, though, we will see a day when manufacturing workers will produce widgets on a home production line and dispatch direct to customers. Or perhaps it will be just too difficult for ‘blue collar’ staff to join their ‘white collar’ colleagues. For big change, there will need to be significant workhome adoption and adaptation.

The drivers for change are there. But so are the difficulties. Time will tell if flexibility and home working take hold universally.

And the results are in: managers aren’t helping manage employee stress

Bringing all employees back to work