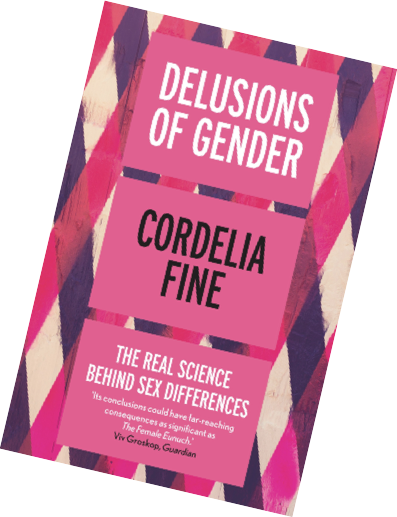 If you’re someone who believes that men and women are fundamentally different and that men are naturally better at some things while women are better at others, buckle up and get ready to have your assumptions and understanding challenged.

For many years it’s been assumed that men were cleverer, more logical than women. And with the advent of brain imaging, many have concluded that the differences seen in PET (positron emission tomography) and fMRI (functional magnetic resonance imaging) scans explain what everyone observes day to day. Cordelia Fine does an excellent job in arguing that cognitive and behavioural differences between men and women are not innate but are socially constructed – beginning when the baby is in the womb. Delusions of Gender shows that the present state of chronic gender bias can be changed.

Early science discovered many differences between the male and female brain. And we routinely observe that men and women behave differently. Men are observed to be good at maths whereas women tend to be more empathic. Men think in a more focused way whereas women think more holistically. Those differences have spawned many books driving a wedge between male and female innate abilities and stoking the argument that men and women are just better at different things.

We are encouraged by some scientists and pseudo-scientists to assume that the physiological differences explain the psychological differences. With the advent of brain imaging using PET and fMRI, further differences between the sexes are evident. As a result, many, in what Fine refers to as neuro-sexism, are enthusiastic to conclude that differences that we see in scans explain what we experience every day in careers, parenting and relationships. No other conclusion makes any sense.

But Fine takes us through a journey beginning with the foetal fork, where half of all foetuses are flooded with testosterone at week 12 of pregnancy to become boys. She explores the physiological and psychological differences, concluding that what we see in scans and autopsies does not necessarily demand that resulting behaviours and abilities should be different.

Her closing arguments show that social conditioning, right from the earliest days in the womb, is a far more powerful explanation for ultimate differences in preference and ability between the sexes. As she notes in one of many examples, just because there’s a greater density of links between the two hemispheres of the brain in women does not mean that women will necessarily be more socially adept and automatically go on to be carers.

Perhaps one of the most memorable parts is towards the end. She describes a husband and wife – both scientists - who try very hard to avoid any sexist stereotyping in bringing up their kids. This and other descriptions show the sheer difficulty in avoiding such societal norms as girls in pink and boys in blue. They show just how deep our assumptions are and just how long it will take to flush sexism through the societal system to achieve equality.

Delusions of Gender is a must-read for anyone interested in equality. It helps generally in making sense of gender gaps like those in careers and pay.

Delusions of Gender is unfortunately a bit tedious. Some may reach a quick conclusion that this is a science book for scientists – and hence not for them. That, if it comes about, would be unfortunate.

I’d recommend it for all managers to give background understanding.

Fine relieves the laborious read by beautifully interjecting with anecdotes from her own family life with husband Russell and two young boys. Delusion of Gender is well referenced, leading to the conclusion that her interpretation of the science in favour of her argument is likely justified.

I’m sure that Cordelia Fine would agree that this book is a milestone on a journey. It debunks the assumptions of the past and returns the argument to the neutral ground where men and women are innately equal. But it shows that we’ve a long way to go until the sexes are treated equitably in society and work.